MAC Championship Game: BCS Or Not, Smile Because It Happened

The wait was entirely worth it. The first overtime game in MAC Football Championship history showed the country exactly what the conference was about.

Share All sharing options for: MAC Championship Game: BCS Or Not, Smile Because It Happened

I don't go in the press box very much. It is very far away from my television and couch and favorite cup which I fill routinely with homemade SodaStream diet pop. What I know about the tension in my living room during an intense game is that I'm pacing around, the dog wonders what is happening, and my wife just shakes her head.

So when a game that intense is happening in front of my very eyes, I'm not entirely certain if that game sank into the heart of men and women who are paid to watch and write about sports for their job. I'd like to think a double-overtime game got to them. And I was certainly tense, keeping in my desire to yell wacky epithets at every turn.

Because what other emotion is there in this game? This championship game is not always close, but it's starting to be the theme. Greatness either manifests itself in a dominant team, which NIU looked like for about 45 minutes, or a teetering competitive stalemate, which brought us back to double-overtime — as previously stated, the first time the MACCG ever needed overtime. Don't ever put the narrative before the horse.

It also marks the 10th time in the championship game's 16-year history — and third straight year — that the margin of victory was within one touchdown. The game was made close because NIU made gaffes to give Kent State life, yes, but turnovers are nothing but opportunities if the other team doesn't cash in on them. Kent State scored 17 points directly after an NIU giveaway.

And while his numbers weren't astounding, the play that brought it all back together was Dri Archer, who was getting adjacent to nothing in the backfield, his team in emergency-mode down 14 points with six minutes to play, streaking for a 60-yard reception. Spencer Keith aired it out and Archer was able to catch up to it, covered aptly by two NIU defenders. It sparked the crowd. It even woke a couple writers up from their compilation of a story about Jordan Lynch just playing a stupidly mean game of "keep away" from KSU. Even though that's exactly what he did, that fact became paragraph number nine.

As for overtime, well, the darn thing happens so fast it's hard to tell or remember what happened, but if there was any proof Mathew Sims can handle the pressure unlike other "college kickers," his 40-yarder to advance the game into Overtime No. 2 was Exhibit B, adding onto his game-winning field goal in last year's championship game. On a night when Lynch almost willed his team to victory, he needed help from Sims, he needed help from running back (yes, they use running backs too!) Akeem Daniels, and they needed help from the defense. Ken Bishop helped NIU stop the run with his three tackles for loss, a sack and a QB hurry. That hurry happened on the final play, forcing Spencer Keith to roll out of the pocket and throw an interception to Demetrius Stone who jutted out in front of Archer. 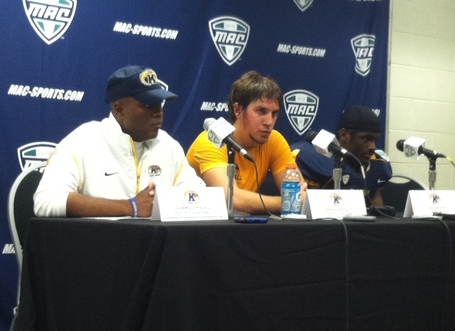 It leaves Kent State with a really nasty feeling. You don't win 10 games then lose the championship and be OK with it, even though as dawn breaks on the weekend, most Golden Flashes fans are going to be overwrought with sports ennui (and/or a hangover) but gradually be able to appreciate what was accomplished in 2012, just hoping that maybe Darrel Hazell comes back for another year, and that Archer keeps NFL Draft aspirations on the backburner while he improves his overall game for the benefit of that sweet, sweet field position.

But the focus is now on Northern Illinois, simultaneously the favored team and the "other" team, a Schrödinger's contender. They won (and "covered," if you're into such frivolities) but are not perceived to climb into a mysterious group known as the Top Sixteen Of The BCS, and whether that's going to happen is an outcome that I couldn't tell you. I don't predict stuff, I just tell you what happened and try to figure out why. But we can all agree that this formula is a dumb process and there's a reason it's going away in two years. 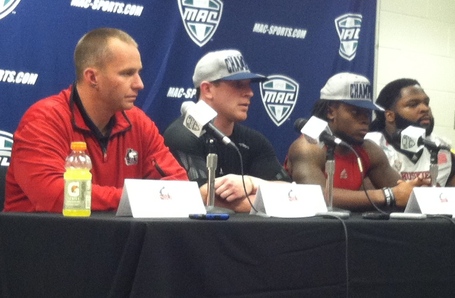 If Northern Illinois goes to Miami, then it'll be incredible. They will have earned it. They won as a team in Ford Field with the quarterback, running back, defensive line, kicker and coaches all executing signature moments. But they may also be relegated to the GoDaddy.com Bowl and play the Sun Belt champion. Or maybe even another bowl. If I'm an Orange Bowl representative — some of whom were in attendance this night — I don't know how I look at that game, and say, "nah, we don't want this in our game."

Who the heck knows.

What we know is that the two teams played in a game that won't soon be forgotten, both in splendor and sensation, to bookend the most incredible MAC season since dinosaurs ruled the land and routinely scheduled Miami (OH) before facing eight straight T-Rexes.