Akron vs No. 23 Northern Illinois Preview: The Huskies Are Finally Heading Home

The No. 23 Huskies look to extend their consecutive home-winning streak to 23 as the Zips travel to DeKalb for Northern Illinois homecoming this Saturday.

Share All sharing options for: Akron vs No. 23 Northern Illinois Preview: The Huskies Are Finally Heading Home

The No. 23 Northern Illinois Huskies (5-0, 1-0 MAC) finally get to play at home again after four road wins in their first five games. The Akron Zips (1-5, 0-2 MAC) head to DeKalb for NIU's homecoming - the third straight homecoming game that the Huskies have played (they won the last two, spoiling Purdue's and Kent State's).

This week's game is a tale of two teams headed in very opposite directions. The Huskies have found a way to win after looking shaky early on and after trailing in every game, climbing to No. 23 in both the AP and Coaches polls. Whereas the Zips have played well early but now are just looking to avoid another conference blowout.

Akron played close games in it's non-conference schedule, including almost derailing No. 11 (at the time) Michigan just a month ago. The Zips sneaked by FCS foe James Madison, led the Wolverines with less then three minutes remaining, and played Louisiana-Lafayette close. Then came the conference games...the Roos have been outscored 74-17 in their two MAC games this season against Ohio and Bowling Green - the two best teams in the MAC East. Unfortunately, it doesn't get any easier for them as they play the best team in the West (and the MAC) this weekend

Akron has not had much of an offensive attack this year, nor have has it had a defensive presence...two signs you might be in for a really long season Zips fans. Rushing the ball has been extremely hard for Akron this year, averaging less than 100 yards per game. The Zips leading rusher, junior Jawon Chisholm, averages less than 50 yards per game - just 287 yards all year (NIU's Cameron Stingily had 266 rushing yards last week alone!). Sophomore quarterback, Kyle Pohl, has had his ups and downs this season, throwing for just under 1,200 yards with 8 scores...but 7 interceptions. I don't think it's official but Akron might be named the Zips because teams just zip down the field on them, as they give up an average of nearly 35 points-per-game. The bright statistic for Akron's defense though: It still doesn't give up as many yards as the Huskies defense.

But who needs defense anyway! By now, we all know what we can come to expect from NIU: Offensive fireworks, with a defense that doesn't play well in the first half. Senior QB/dark horse Heisman contender Jordan Lynch leads the Huskie attack through the air. He's completing 64 percent of his throws for 1,113 yards, 12 TDs, and just 4 INTs (two of which came last week). But it seems the Huskies have also found a workhorse in junior halfback Cameron Stingily. The duo of Lynch and Stingily have totaled 1,110 yards this season and Stingily had a career game last week at Kent State, rushing 37 times for over 250 yards and two TDs. 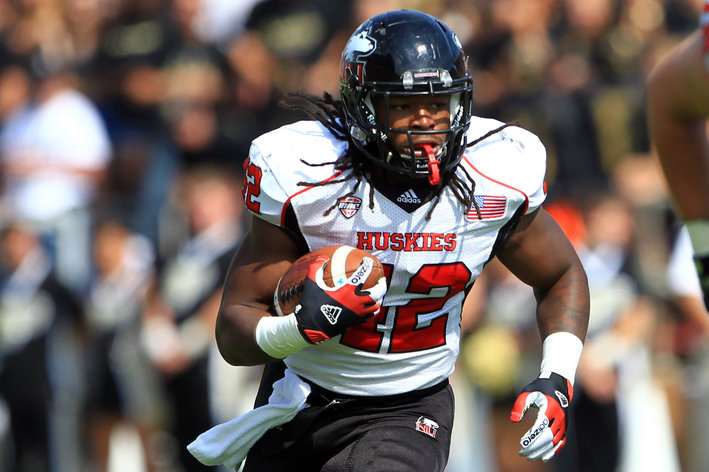 NIU's Cameron Stingily has had an exiting few days that included a career-high performance Saturday, getting arrested Sunday, and winning an award Monday.

After giving up loads and loads of yards (and points) to teams early on, it seems the Huskie' defense has finally settled down, but just a little. In the last two games the Huskies have forced 7 turnovers and gave up a season-low 392 yards to Kent State last week. Akron, like every other team, should be able to move the ball decently, but it really needs to protect Pohl as the Huskies are now Top 10 in the NCAA in turnovers gained (6th, averaging 3 TO/game) and sacks (9th, averaging 3.4 sacks/game). Last week Pohl was sacked eight times by Ohio's young defensive line.

And if that isn't bad enough for Akron, Northern Illinois just LOVES playing at Huskie Stadium, and has a chance to set MAC history this week. The Huskies own the nation's longest active home winning streak - notching 22 straight wins in DeKalb, last losing Sept. 26, 2009 to Idaho. If they win Saturday, they will pass Marshall for the longest home win streak in MAC history (Marshall won 22 straight home games from Sept. 1997 until Oct. 2000). NIU also owns the nation's longest conference winning streak - winning its last 18 games against the MAC.

There are a lot of streaks on the line for the Huskies this week. And, barring a spectacular performance from Akron and a dismal showing from NIU, the Huskies will make it 23 straight home wins, 19 straight MAC wins, and start 6-0 for the first time since 2003.