Why The MAC Needs A Better TV Contract

A comparison of FBS conference TV contracts and the MAC's minuscule TV revenue from ESPN.

Share All sharing options for: Why The MAC Needs A Better TV Contract

With all of the talk regarding conference realignment to pull in the big bucks from TV contracts I was curious about what the MAC’s TV contract looked like in comparison to everyone else and found the following (source) : 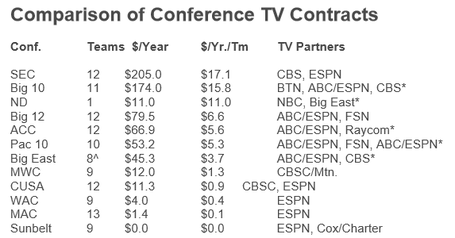 I was rather disappointed to find out that MAC teams pull in roughly $100,000 per year in comparison to the members of C-USA which are receiving $900,000 a year. Even the members of the now extinct WAC were getting about $300,000 more a year than the MAC.

The financial gap between C-USA and the MAC is puzzling. Both conferences play second fiddle geographically to bigger conferences and the talent levels are fairly similar every season from top to bottom. Which leaves me with the following questions: the Mountain West was smart enough to ditch ESPN, so why haven’t we? Every channel in the U.S. clamors for more live sports, so what makes us so unappealing to the rest of the nation in comparison to C-USA or MWC?

When given the national spotlight though, the MAC does well with local TV ratings. According to an ESPN press release, “The Discover Orange Bowl averaged an 11.1 overnight in Chicago, the second highest ESPN bowl rating in Chicago on record.” It would be interesting to see what kind of ratings there would have been in throughout Ohio if it would’ve been Kent State, Toledo, or Ohio.

The MAC’s TV contract ends after the 2016-17 season. My hope is the conference continues to see growth and success and a couple visits to this fancy new playoff system to encourage a better deal with ESPN (or better yet ditch ESPN). Heck maybe even by then the Big East will have fallen apart and Cincinnati will come crawling back home to us and give us another Ohio TV market!

Sadly though the MAC is still far away from having a proper level of respect amongst the “group of five”. But if the next few years of MAC football can be as exciting as the 2012 season there is no reason why we shouldn't command respect along with some extra funding.