Time to look at the 2013 MAC football season. We're going to preview the conference unit by unit, ranking the teams one through 13 at every position and facet we can think of. Stepping up next: Conference Rivalries.

Rivalries are a little different than the other facets of the football programs we've looked at so far. For one thing, although players might be in their third or fourth year, rivalries might go back decades. And while we tend to take a "what have you done lately?" approach with coaches, rivalries are our chance to consider the history and traditions of a team.

Plus, there's the obvious difference: it takes (at least) two schools to have a rivalry, and when that rivalry is good, both teams win.

The criteria for consideration here were simple: the rivalry must already exist, the rivalry must be ongoing, and the rivalry must be between MAC teams. In terms of ranking them, I looked at factors such as historical impact, traditions, pageantry, continuity, and competitiveness. Then I ignored all that and put them in the order that seemed best to me.

Since EMU fans were feeling left o ut following the creation of the CMU-WMU Trophy, and Buffalo didn't have any rivalry/trophy games, a new trophy was created by blogger fiat. Astonishingly, EMU is 5-0 all-time against the Bulls, making this rivalry the Eagles' only active win streak against a Football Bowl Subdivision team.

Without a doubt, the Anniversary Award is the least of the official rivalries. Bowling Green and Kent State were both founded in 1910, so in 1985, for their 75th anniversaries, they established this trophy. Bowling Green has won 20 of the 27 meetings.

The Bronze Stalk Trophy is basically a ginned-up award to try to create a MAC rivalry for two schools that didn't have any rivals. Ball State won the first trophy in 2008, but Northern Illinois has had a lock on it since then. It's actually a good looking trophy, but the rivalry just isn't there yet.

Although it's commonly called the "Victory Cannon", the official name of the trophy is the "CMU-WMU Rivalry Trophy". Created by the student government associations of the two schools in 2008. Central Michigan had this to say about the trophy when it was created:

One side of the wood statue is maroon and lists each of CMU's victories over the Broncos. The opposite side is brown and notes each of the Broncos' wins in the series.

A cannon sits atop the trophy, representing the cannon that is fired at CMU's Kelly/Shorts Stadium and WMU's Waldo Stadium.

Um...yeah. I do give them credit because the students at these schools legitimately dislike each other.

The Michigan MAC Trophies (one for football and one for men's basketball) were created by the Michigan Sports. Hall of Fame in 2005. Since it's a three-way rivalry, there's the possibility that the teams could tie at 1-1 in the round-robin, in which case the prior trophy winner retains the award. This has resulted in EMU holding the trophy for four of the last six years, which even I admit is an utterly ridiculous thing.

Legend has it that in 1870, John Buchtel was near Kent, searching for a site to found a new college, when his wagon became stuck in mud, and although his horses eventually pulled the wagon loose, a wheel remained stuck. Buchtel went on to found Buchtel College just 10 miles away, which eventually became the University of Akron. In 1902, the wheel was discovered and eventually found its way to Raymond Manchester, the Dean of Men at Kent State. In 1945, Manchester offered the wheel as a trophy to be used in the Akron-Kent State football game. Although Akron holds the overall lead in the series, 30-22-2, Kent State leads in the Wagon Wheel games (post-1945), 22-19-1.

2. Battle of the Bricks (Miami-Ohio)

The oldest schools in the MAC, Miami and Ohio are both known for their beautiful red brick campuses. Except for a two-year break during World War II, the football game has been played every year since 1928. Miami leads the series 52-35-2, though the Bobcats have won six of the last seven games.

1. Battle of I-75, formerly the Peace Pipe (Toledo-Bowling Green) 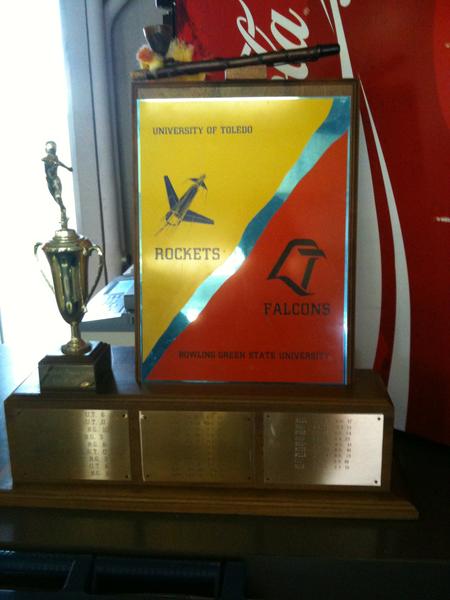 Although the new name sucks, this is not only the top rivalry in the MAC but arguably among the best in the nation. Bowling Green coach Doyt Perry, for whom the stadium is named, called it "the most important game on our schedule".

An important thing was the proximity of campuses. We probably had more kids from Toledo than anywhere else, at least when I was coach. Some of these kids played with or against some of the Toledo players while in high school. So there was no real problem in getting the kids up for the game.

This rivalry dates back to 1919, and it didn't take things long to heat up; in 1924 Bowling Green accused Toledo of bringing in a ringer. After a 63-0 Toledo win in 1935 triggered an on-field brawl and fan riot, the series was suspended. In 1948, the same year the football rivalry resumed, a peace pipe, symbolizing a new spirit of goodwill between the schools, began to be used as a trophy by the basketball teams, though apparently that spirit didn't translate to the football teams, as the 1951 game brought another brawl involving both teams and at least 100 fans. This original peace pipe trophy disappeared in 1969, possibly stolen from a Toledo office, but in 1980, a small replica was placed on a trophy for the football teams. Following the 2010 game, the Peace Pipe Trophy was retired, with Toledo holding a 16-15 trophy series lead, and a new Battle of I-75 trophy was created. (Well, actually...)