Time to look at the 2013 MAC football season. We're going to preview the conference unit by unit, ranking the teams one through 13 at every position and facet we can think of. Up first? The field generals.

Last year was the year of the quarterbacks. In last year's rankings, we saw the #7 quarterback unit go 12-1 and win the MAC Championship, the #1 unit get decimated by injuries and struggled to find momentum with a new WR core, and Matt completely guess wrong on UMass. Now we enter 2013 having graduated a lot of good quarterbacks from last season. But like every forest fire, there comes new life. This season is no different, as new faces will emerge as game-changers from under center.

13. Akron Zips (Last season: 12) - The Zips could have a very long year this year. After Dalton Williams played decently last season, he is now gone and they are back to having very little at one of the most important positions on the field. Kyle Pohl should be the starter, but honestly, it could be anyone's spot. After Pohl is a bunch of unknown names. Jawon Chisholm should be very busy this season as the work-horse.

12. Kent State Golden Flashes (Last season: 10) - Good news: They have Dri Archer and Trayion Durham. Bad news: Spencer Keith is gone. But he wasn't regarded as an "Elite" QB anyways, so is it that bad? David Fisher should step in nicely but has a severe lack of noticeable depth behind him. You still should never complain when you have that running tandem behind you, and can always slot Archer for a multi-dimensional look, but Fisher has to stay healthy for the Golden Flashes to be competitive in my honest opinion.

11. Central Michigan Chippewas (Last season: 6) - OK Chip fans, before you get mad, let me explain. This isn't as much of a knock against presumed starter Cody Kater as it is his lack of experience, the overall lack of known depth, and the known of what teams above Central on this list vs the unknown of what's going on in Mt. Pleasant. Ryan Radcliff had a number one NFL draft pick to protect him, WRs such as Titus Davis and Cody Wilson, and Zurlon Tipton running the ball and he still managed to struggle. What does that say about his back-ups?

10. Massachusetts Minutemen (Last season: 11) - OK, so I won't screw this up. Mike Wegzyn should be the starter and A.J. Doyle should be his back-up. Right? Wegzyn is still progressing, but as a sophomore, already has a season running Molnar's offense at the FBS level under his belt. He can only get better, and looked better as the year went on. Another year, let's see what the kid can do now.

9. Eastern Michigan Eagles (Last season: 9) - Consistently 9th. Hmmm...... Anyways, Tyler Benz has had time at the QB position and should do well with full reigns. Alex Gillett isn't there to cause any controversy either, so there is finally peace at the position. At least I think. Bronson Hill should still be the mainstay in Ypsi though, so it doesn't matter too much.

We ranked the Top 68 returning football players in honor of the MAC's 68th season.

8. Buffalo Bulls (Last season: 13) - They get a huge jump this year due to the emergence of Joe Licata. Plus, Alex Zordich is still there to back up Licata, and he isn't a slouch either. They aren't great, and Licata beat a reeling WMU team (that threw 4 INTs to the Bulls defense that day), UMass, and Miami, so his sample size is tough to grade, but the jump from EMU to Buffalo is a big one.

7. Bowling Green State Falcons (Last season: 5) - Oh Matt! Sure fellow Matthew, and BGSU QB Matt Schilz has played good, but he had a huge drop from 2011 to 2012. He threw 500 fewer yards, half the TDs from 2011, and an extra INT. Luckily, his defense bailed him out, and the Falcons still had a good season. Suss questioned whether or not Schilz was a Top 5 QB in the MAC, but didn't know about Lynch or Wenning at the time. So I digress. Schilz = Good. Plus, Matt Johnson should be a decent back-up for a team that already doesn't rely too much on offense anyways.

6. Miami RedHawks (Last season: 2) - Miami now has to replace the "flow-tastic" Zac Dysert with Austin Boucher. No biggie. Remember that Boucher led the RedHawks to a MAC Title in 2010, throwing this game-winning touchdown (WARNING: Look away Huskie fans)

Boucher also has kissed the GoDaddy.Com girl! But then he sat most of last year while Dysert did his thing, so does he have rust? Also, the depth behind him is an issue, but we know Boucher can produce, just will he without Nick Harwell to throw to?

5. Toledo Rockets (Last season: 3) - I flipped WMU and Toledo based purely on the fact that behind Terrance Owens is a bunch of freshmen. Owens is good, and had a great 2011, but took a step back in 2012. He now has full control with Austin Dantin gone and has targets to throw to. He can also run. He has the pieces around him, and he is a Top 5 MAC QB, just I can't put TVT below Owens knowing what both can do with weapons around them.

4. Western Michigan Broncos (Last season: 1) - I didn't make last year's rankings, so that wasn't my homerism. After Alex Carder had a monster 2011 throwing to Jordan White, and Tyler VanTubbergen had a 6 TD game against Akron, it was easy to see why the Broncos would be a monster at QB. But then Carder got hurt (and had a subpar year) and TVT was thrown into the mix against Toledo and NIU before leading this insane comeback against CMU in his final game of the season. So VanTubbergen has the talent, but just needs to consistently perform against higher competition. He's experienced it, now just has to put it all together. And he can, we've seen it. 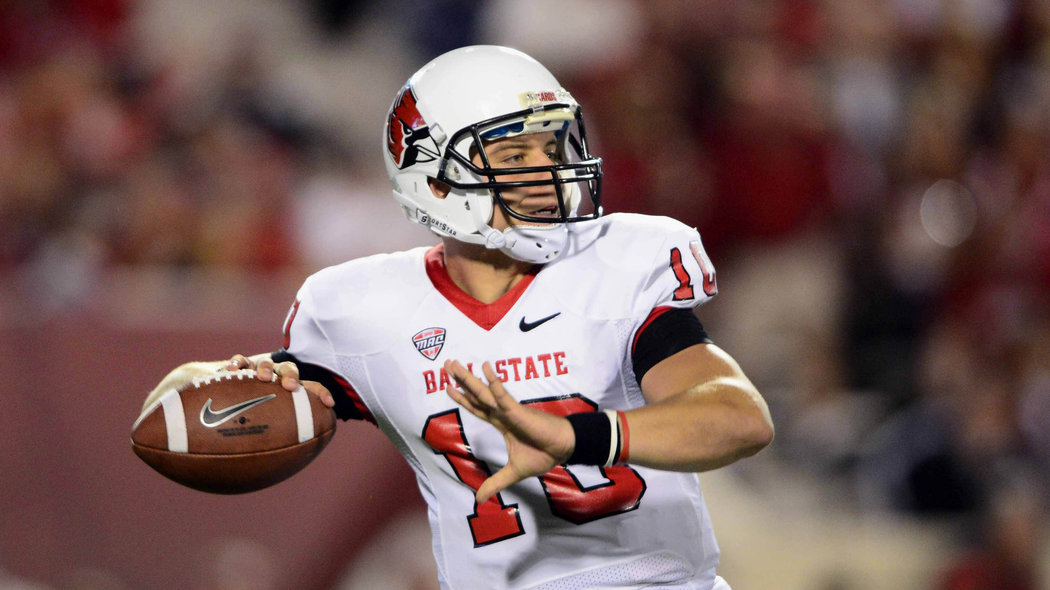 3. Ball State Cardinals (Last season: 8) - Keith Wenning is a monster. I predict a great season in his senior year with a balanced attack around him. Like Toledo and Owens, Wenning has the tools. Why the bump? I just feel like the Cardinal offense is more likely to succeed under Wenning than Owens and vice versa. Plus, Wenning wasn't as spotty as TVT was, so he earns the 3. All 3 QBs are very worthy of top 5, making this ranking very tough and interchangeable.

2. Ohio Bobcats (Last season: 4) - Tyler Tettleton had a drop last season in production, but still managed to throw an 18-4 TD-INT ratio. He also sat the FCS game against Norfolk State when Derrius Vick came in and threw 199 yds and 4 TDs. Vick is a workable back-up and will be a sophomore this season, presumably gaining the reigns next season. This is a very solid 1-2 punch at QB, but not the best, only because of obvious reasons...........

1. Northern Illinois Huskies (Last season: 7) - To Matt's credit, no one could've predicted that Jordan Lynch would utterly obliterate the entire MAC with not only his arm, but his legs. Against Toledo, he had nearly 600 yards of offense by himself! He is a monster. His back-up, Matt McIntosh, is no slouch either, but hasn't had the full experience yet. Still, with Lynch at the helm, NIU is the clear leader at QB.