New BGSU coach Dino Babers favors a high-powered offense that can be very attractive to quarterbacks. The Falcons are realizing an immediate benefit by bringing in a highly-regarded signal caller who has seen the "Art Briles" offense up close.

The Bowling Green Falcons have a new head coach in Dino Babers.  With Babers comes a new offense, patterned after the one Art Briles runs with the Baylor Bears.  Babers' offense needs good quarterback play in order to succeed, and his success with Jimmy Garoppolo at Eastern Illinois illustrates that.  In the fall of 2015, the Falcons may have a new quarterback running the system.

The Toledo Blade reported this morning that Clayton Nicholas, who was a redshirt freshman at Texas Tech University during the 2013 season, has transferred to Bowling Green. 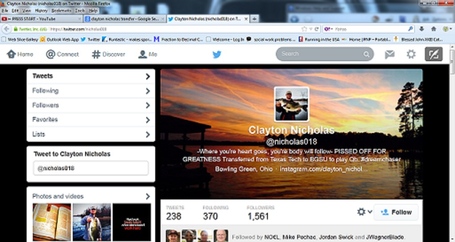 Recent tweets on the account indicate that he is already in Bowling Green.

Under NCAA transfer rules, Nicholas will have to sit out the 2014 season.  He will be eligible to play in 2015, and he will have two years of eligibility remaining.

Nicholas is from Abilene, Texas and attended Abilene Cooper High School.  He was listed by both Rivals.com and ESPN.com as being 6'3" and 205 pounds, although Texas Tech's official website now lists his weight as 220.  In his final two seasons of high school, he completed over 60 percent of his passes, threw for 5,959 yards and had 56 touchdowns to just 23 interceptions.

Rivals.com gave him a rating of 5.7 out of a possible 6.1, and they say the following about that rating:

5.7-5.5 All-Region Selection; considered among the region's top prospects and among the top 750 or so prospects in the country; high-to-mid-major prospect; deemed to have pro potential and ability to make an impact on college team

They also listed him as a three-star prospect.  He was rated the 17th-best quarterback in the class of 2012 and the 45th-best overall prospect in the state of Texas.

These players show flashes of dominance, but not on a consistent basis -- especially when matched up against the top players in the country. Players closer to a 79 rating possess BCS-caliber ability and the potential to be a quality starter or all-conference player. Players closer to a 70 rating are likely non-BCS conference caliber prospects.

According to ESPN, he was the 23rd-best quarterback in the country for the class of 2012 and was the 54th-best overall prospect in Texas.

ESPN's analyst had some very flattering things to say about Nicholas, including:

Possesses one of the elite arms in this class and will deliver some eye-popping throws especially in the deep passing game. He has very good size and adequate bulk. Looks the part with ideal measurables. Is an adequate athlete with the necessary footwork to be effective in the drop-back passing game and also buy time if needed.

He is a very good play-action passer and outstanding deep-ball thrower. His timing, ability to anticipate and accuracy set him apart from others.

Overall, Nicholas we feel will end up being one of the top QB prospects in this class when it is all said and done. He is a powerful passer with measurables and is sound fundamentally. Excellent prospect.

The puzzling thing about Nicholas is that he was a late signer who did not garner a lot of interest.  My assumption there is that the lack of interest was related to the decline in his numbers from his junior to senior seasons in high school.  His completion percentage dropped from 65 to 60, and his touchdown-to-interception ratio dropped from 30-7 to 26-16.

Despite that (and the fact that he sat on Texas Tech's scout squad for two years), Nicholas appears to be a very intriguing -- and potentially game-changing -- prospect for the Falcons.

At the very least, Nicholas will know what Babers' offense is capable of, as Texas Tech plays in the Big 12 with Baylor.  As scout team quarterback, he would have been tasked with running that offense against Texas Tech's defense.  He will also have a year and a half to fully immerse himself in Babers' offense while he waits to become eligible to play at BGSU.  The level of expertise he could gain in that time could pay immediate dividends in 2015.

It's unclear what this will mean for incumbent starter Matt Johnson, who will be a senior at BGSU in 2015, or for Bowling Green's other quarterbacks (both backups and incoming recruits).  However, as the Falcons showed in 2013, strong quarterback competitions can be a big positive.  No matter who ends up playing in 2015, all of the quarterbacks on the roster ought to be better as a result.

And if Babers has found himself a quarterback that can do what Garoppolo did for him at Eastern Illinois?  The rest of the Mid-American Conference is in big, big trouble.