Bowling Green doesn't have a long history in the MAC Championship Game, but last year might have been the start of a run of appearances for the Falcons.

The first MAC championship game was held in 1997 in Huntington, West Virginia, pitting the Marshall Thundering Herd against the Toledo Rockets.  The Herd won that first MACCG and went on to win five of the first six MACCG... all played in Huntington.

The MACCG was played at campus sites until 2004, when Ford Field became the home of the MACCG.

This will mark the third appearance in the MACCG for Bowling Green.  They first played in the championship game in 2004 when they hosted the Miami RedHawks at Doyt Perry Stadium.  Despite the home-field advantage, the Falcons were beaten soundly by Miami, who was led by quarterback Ben Roethlisberger.  Approximately 24 months later, Roethlisberger would lead the Pittsburgh Steelers to a NFL Super Bowl title.

Last year, the Falcons defeated the heavily favored Huskies, who were led by Heisman Trophy candidate Jordan Lynch.  Matt Johnson, Ronnie Moore and a dominating defense would lead the Falcons to the decisive victory.

Here is brief recap and statistical highlights of Bowling Green's appearances in the MAC Championship Game.

In the first MAC Championship game played on grass (or more like mud), Miami quarterback Ben Roethlisberger continued his mastery with a game record 440 passing yards, completing 26-of-35 pass attempts with four of his aerials resulting in touchdowns. His counterpart, Falcon signalcaller Josh Harris, performed very well also, passing for 260 yards and two touchdowns and rushing for a game-high 83 yards and a score. Three touchdowns in the final nine minutes of the third quarter gave the RedHawks a 42-20 advantage following a tight first half. Miami became the first road team to emerge victorious in the league title game. The 22-point margin of victory and 576 yards of total offense by Miami also set championship game records

Reliving every MAC Championship Game since 2004 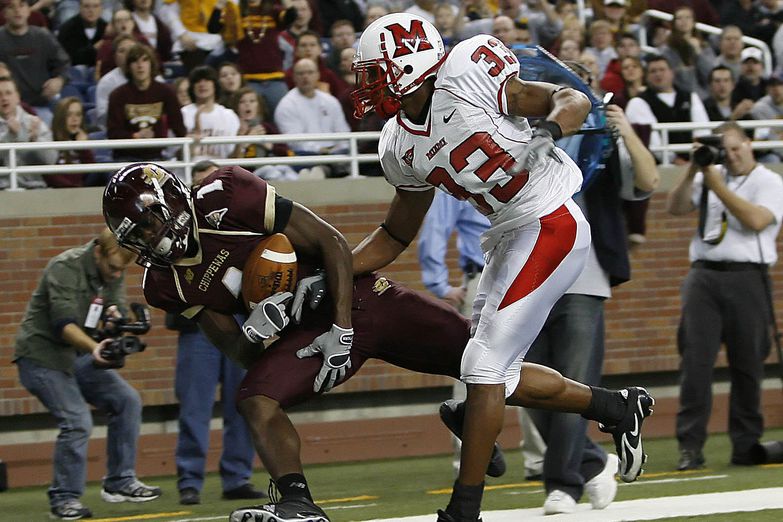 Bowling Green won its first Marathon MAC Football Championship since 1992 with a 47-27 win over No. 14 Northern Illinois. Bowling Green improved to 10-3 on the year and ended the Huskies undefeated season with a 12-1 overall record. Falcons sophomore quarterback Matt Johnson was 21-of-27 for 393 yards and five touchdowns, which set a new MAC Championship Game record for touchdown passes in a single game.

Bowling Green opened the scoring on the opening drive of the game with a five-play, 75 yard drive capped by a 28-yard touchdown pass by quarterback Matt Johnson to tight end Tyler Beck for the early, 7-0 lead.

Northern Illinois responded with an 11-play, 73-yard drive as quarterback Jordan Lynch found receiver Juwan Brescacin for a one-handed grab in the back of the end zone for a 14-yard touchdown pass to tie the game, 7-7.

Bowling Green regained the lead as kicker Tyler Tate capped a five-play, 67-yard drive with a 26-yard field goal for the 10-7 lead. The Falcons added to their lead as Johnson found a wide open Ronnie Moore for a 36-yard strike to open a 17-7 lead.

Bowling Green marched 88 yards down field in nine-plays as Johnson once again found an open receiver in the end zone, this time it was receiver Heath Jackson for a 22-yard scoring connection and a 24-13 Falcons lead with 5:39 left in the half. Johnson threw his fourth touchdown pass of the half as he found tight end Alex Bayer for a 12-yard touchdown pass for a 31-13 lead with 13 seconds left in the first half.

The Huskies took the opening kickoff of the second half and marched 64 yards in seven plays as Lynch's eight-yard touchdown run cut the Falcons lead, 31-20. Bowling Green's Tyler Tate nailed a 52-yard field goal with 14:44 left in the fourth quarter to open a 34-20 lead. The 52-yard field goal by Tate tied a MAC Championship Game career long field goal.

Following an interception thrown by Lynch, the Falcons turned the pick into another touchdown as Johnson's shovel pass to Travis Greene extended the Bowling Green lead to 40-20 with 10:17 left in the fourth quarter.