Running From the Truth: The 2014 UMass Running Back Situation

We've covered the horribleness of quarterback and the depth of defense. Now it's time to move on to the backfield. Will it be feast or famine in 2014?

Share All sharing options for: Running From the Truth: The 2014 UMass Running Back Situation

In 2013, Charley Molnar and the Massachusetts Minutemen began the season behind one of the highest rated recruiting classes in school history, and one of the top classes in the MAC that year. The crowning jewel of the program was running back Lorenzo Woodley. Added to the bevy of backs already on the roster, UMass was ready to ground and pound their way to the top of the MAC.

Well, that didn't go as Charley hoped. UMass was 10th overall in yards, and an even worse second-to-last in yards per carry, and Charley Molnar was out of a job. Of course, when looking at rushing stats quarterbacks, wide receivers, and the occasional defensive lineman get included. While you know the picture won't get prettier, let's look at just the running backs.

And if we make like Inception and dig deeper, here are the five running backs that saw carries for UMass during the year:

First thing that sticks out: Not one UMass running back was better than 11 other team averages. This wasn't the case of a one or two bad players bringing down the group. Hell, there wasn't one player with a fluky small sample size that you can have unfounded optimism for. If we were to take running backs receiving 80 or more carries during the year (to include the three top rushers for UMass), Jamal Wilson, Lorenzo Woodley, and Stacey Bedell would rank 19th, 20th, and 21st out of 21 qualifying backs. This was not a core group that inspired confidence.

Did Mark Whipple inherit a lemon at running back? Lets dig deeper on each of the three main rushers from last season.

Jamal Wilson was never supposed to be the guy in Amherst (or Foxboro), but injuries left what was once a deep position very thin for the Minutemen. With Stacey Bedell and Lorenzo Woodley sidelined by ankle injuries, Jamal Wilson burst onto the scene for the Minutemen with a 20 carry, 119 yard effort against Bowling Green. His 6 yards a carry average that game would be the highest of the top 3 running backs in a single game. Unfortunately, Wilson would never be as dominating after that day. 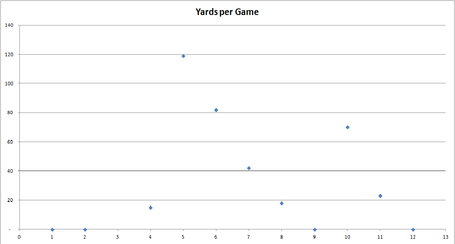 Since running against Wisconsin (3.4 yards per carry allowed) is not as easy as running against  Eastern Michigan (6.3 yards per carry allowed), I devised a simple formula to determine effectiveness. I took the yards per carry average of the rusher and subtracted the yards per carry the opposing defense allows (We'll call this AYPC). In order to keep out those one and two carry outliers, only games were the rusher received 5 or more carries qualified. Jamal Wilson scored -7.8 AYPC on 6 qualifying games, good for a -1.3 AYPC per game. This means that Wilson was over a yard worse per carry than expected. His only positive performance came against Bowling Green. This is probably not a good sign, considering he was our highest rated back.

Lorenzo Woodley has so much upside. Despite battling ankle injuries, he turned a 163 yard performance against Northern Illinois, a number no other back on UMass was within 40 yards of. This was despite being hampered by ankle injuries most the season. Better news: He's only a freshman, so he should get better. The Bad News: Despite those two pieces of optimism, there really is nowhere to go but up for Woodley. 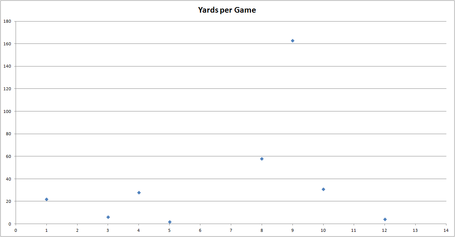 No other performance by Woodley eclipsed 60 yards. Even in his 163 yard opus took 38 carries (one might wonder why a running back coming off an ankle injury would carry the ball 38 times in a 63-19 rout, but that's another story). His 4.3 YPC that game barely eclipsed Northern Illinois stingy 3.9 YPC allowed. Overall, in 6 qualifying games, Woodley had a -4.1 AYPC, or -.7 AYPC per game. While it's not in the black, it ends up better than Wilson's AYPC, and considering Woodley spent the season battling ankle injuries (I'm not a doctor, but I imagine it's tough to run on injured ankles) and is entering his sophomore season, there may be reasons to get excited about the crown jewel of the 2013 class.

It's odd to talk about Stacey Bedell , considering he transferred to Stony Brook in the offseason. At least we can see if the loss of Bedell spells more doom and gloom for the Minutemen. Bedell won the starting job in camp last season after Jordan Broadnax had a "short term" knee injury that ended up costing him the season. While Stacey Bedell would keep the running back tradition alive by also getting injured, he did manage to log 7 starts of 5 carries or more, eclipsing 70 yards twice. 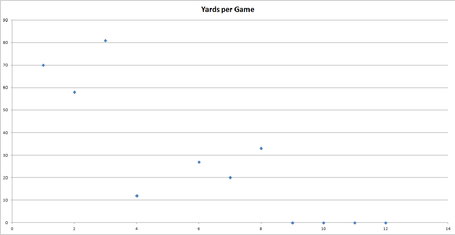 While he had his best games, yards wise, against Wisconsin and Kansas State, he never eclipsed 4 yards per carry. In fact, Bedell failed to eclipse the 4 yards per carry mark during any game last season. Not counting the Maine game (FCS stats were not readily available), Bedell had a AYPC of -8.7, or -1.45 AYPC per game, good for last in the group. It's especially disheartening to look at the three games after his return from injury, where he never managed over 3 YPC. Considering both Woodley and Wilson outperformed Bedell, the loss probably won't hurt the Minutemen.

There are some caveats to this study. Running backs are often dependent on offensive lineman, and stats for the offensive line are few and far between (though they were much better in terms of sacks allowed in 2013 compared to 2012). If there's anything to hold on hope to, it's that the Minutemen still have depth. Lorenzo Woodley, when he's healthy, looks like he can play at a high level.  JT Blyden, a three star running back from Pennsylvania, joins the team this year, and was one of the Minutemen's highest rated 2014 recruits. Justin Broadnax is still in the wings, depending on his recovery from his knee injury goes. Even Shadrach Abrokwah, who saw only 51 carries in two games, broke the 90 yard barrier twice, and averaged 4YPC. The nice part about depth is while they all might not be winners, you only need one to be.