“I had confidence in our defense.” – Tim Beckman, UT head coach, in the post-game press conference following a 63-60 defeat to Northern Illinois on 11/1/11.

In sports the agony of defeat comes in many different forms; whether you are the heavily favored upset victim, or the underdog that battled to the end only to come up inches short, the loss still stings.  Then there is the type of loss that creates a cloud in your locker room, creates a tone in a program and perhaps sends your opponent to heights never before envisioned.

On Nov. 1, 2011 the University of Toledo Rockets were poised to take firm control of the Mid-American Conference West Division, holding a full game advantage over the Northern Illinois Huskies, which had lost its conference opener at Central Michigan.  A Tuesday night win at home would all but secure the Rockets their first trip to the MAC Championship since 2004.

Beginning with the inaugural MAC Championship Game played in 1997, The University of Toledo participated in five of the first eight Conference Championship games, claiming two victories.  Followed shortly thereafter by a quick and sudden turn towards conference mediocrity.  Fast Forward to 2011 and now in his third season as head coach and coming off a bowl game appearance in 2010, Tim Beckman seemed poised to lead the Rockets back to Detroit. 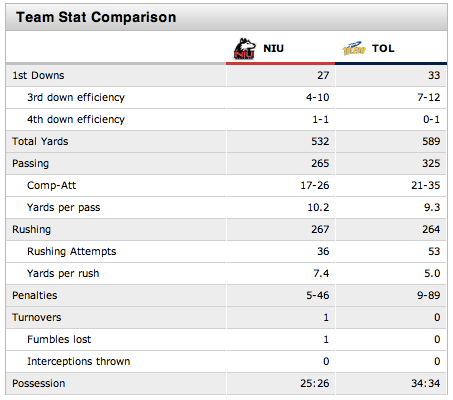 The two teams combined for 123 points and nearly 1,200 yards of offense on that cold November evening. Nearly three years later, these two programs have went down noticibly different paths.

Beyond the final score and the sheer abundance of points scored that Tuesday evening, what I remember most from sitting in the stands was watching Tommylee Lewis come flying out of the south end zone of the Glass Bowl to take the opening kick back 100 yards for an early NIU lead.  The more amazing feat came just a few minutes later when he once again, from the same end zone, sped 95 yards to give NIU a 14-7 lead.  Six minutes into the game, the Huskies had not run a play from scrimmage and Tommylee Lewis had supplied two touchdowns that would set the tone for the entire night.

Eventually Toledo's offense got going, and the game went back and forth for some time. NIU took a 28-24 halftime lead and maintained a four-point edge heading into the fourth quarter, 42-38.  During the course of the frantic fourth quarter Toledo rebounded from an eight-point deficient to take the lead twice.  First on a 13-yard touchdown reception from current Tampa Bay Buccaneer Eric Page to gain the lead 53-49; and later on a three-yard rush from Adonis Thomas, who finished with 160 yards rushing, to again lead 60-56 with just over four minutes remaining.

There was jubilation amongst the Rocket faithful that remained in the Glass Bowl. One defensive stop and the midnight blue and gold were headed back to Ford Field. But, there also existed the overwhelming sense that too much time was left on the clock.  Starting at his own 34-yard-line, Chandler Harnish began the drive with a 17-yard rush close to midfield and NIU running back Akeem Daniels followed with a 22-yard rush to get the Huskies inside the Toledo 30-yard-line in just two plays.  Following a couple Harnish completions, and as it turned out timely Huskie penalties to roll additional time off the clock, Perez Ashford broke open in the back corner of the end zone for the game winning touchdown reception with under 20 seconds to play.

Sitting through a shootout like this, the outcome of that final Huskie drive likely surprised none of the blue and gold faithful that remained at the Glass Bowl.   What was so agonizing to watch though was Tim Beckman's arrogance and unjustified belief in his own defense.

After giving up over 500 yards of offense to Harnish, plus two kickoff returns for touchdowns, Beckman held firm on that final drive believing his defense could get that one stop.  As NIU entered the red zone, looking ever more confident of the winning touchdown, Beckman held on to two timeouts, thus assuring his own high powered offense would have just seconds remaining to answer the go-ahead score.    Those seconds proved too few and NIU was victorious 63-60.  A Rocket offense that rang up almost 600 yards of offense and moved the ball at will in the second half was never given a chance because their coach simply did not give them enough time.

All wasn't lost for UT's season. Although the Rockets once again gave up 63 points the next Tuesday night against Western Michigan, enough points were scored to win 66-63.  They finished the season with a win over Air Force in the Military Bowl and a solid 9-4 record.

A Rocket offense that rang up almost 600 yards of offense and moved the ball at will in the second half was never given a chance because their coach simply did not give them enough time.

Toledo currently holds a four game losing streak against the Huskies with a trip to DeKalb looming in 2014.  They still have not appeared in the MAC Championship game since 2004 and have witnessed their West Division rivals sore to new heights both in the conference and on a national stage.   The Huskies followed up that 2011 game and closed out the season with five more victories including a win over Ohio in the MAC Championship, and Arkansas State in the GoDaddy.com Bowl.  They then finished 12-1 in 2012 and earned the conferences first BCS birth in the Orange Bowl.  In 2013 the Huskies rattled off 12 straight wins to start the season, garnered tremendous national attention, and saw starting quarterback Jordan Lynch earn a trip to the Heisman Trophy Ceremony. (That's right, the Huskies actually got better after losing Chandler Harnish to the NFL. Life's not fair.)

One game does not make or break a program, but Toledo was one defensive stop away from a likely birth in the 2011 MAC Championship game. NIU did not allow them that opportunity and since then the Huskies have never looked back.

Following the 2011 season Tim Beckman took the head coaching position at Illinois, but his legacy as the Rockets head coach may be best remembered with one quote. Asked in the postgame press conference following that heartbreaking loss in 2011 if he had considered calling a timeout on NIU's final drive, Beckman said:

"We talked about it a little bit on the headsets. I thought it was a double-edged sword. We felt that we had them moved back as a result of a couple penalties and we could stop them. I had confidence in our defense."

I think Beckman was the only one wearing Toledo colors that held that belief.