MSU plays against two Michigan MAC schools this season. Do WMU or CMU have any chance for an upset?

Last year's Michigan State Spartans lost twice the amount of games they did in 2013. In 2013, they lost one game. And if the Fiesta Bowl this past season is any indication, the Spartans are gonna be bringing back a sense of urgency, as well as a huge chip on their shoulder after missing the College Football Playoff thanks in part to Ohio State's resurgence.

MSU has seen a steady place in the top 10 in the past three years of the Mark Dantonio era, and the expectation in East Lansing has gone from bowling to competing for a playoff spot. Athlon Sports projects the Spartans to finish seventh in the nation, second in the B1G East (and the B1G in general) behind only the Buckeyes. It sounds all right on the surface, but look at the roster, and it's extremely surprising that the concensus is as positive as it is. 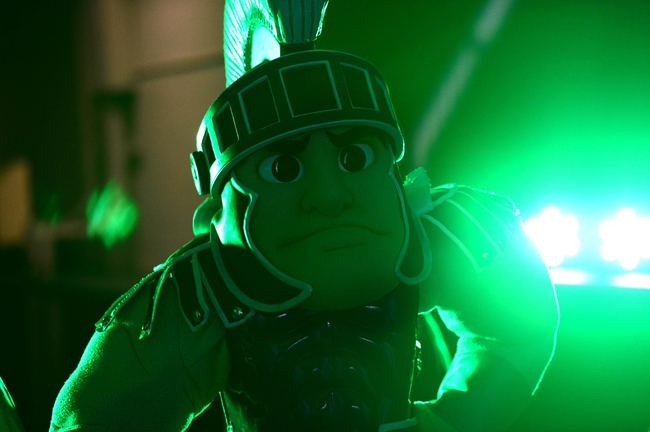 Michigan State is losing a lot of special skills players on both of the ball, such as Tony Lippett, Trae Waynes, Jeremy Langford, Kurtis Drummond, and Marcus Rush to graduation or the pros. Their defensive coordinator extraordinaire Pat Narduzzi has also departed the program, starting a rebuilding project on the Pitt Panthers. They might turn out just fine though; last season, the MSU replaced half of their front seven on defense and experienced a drastic decrease in points against to a miserly 22nd. (Twenty-second!)

This season, the "rebuilding" will be on the offensive side of the ball, where the Spartans saw a huge amount of growth last season with the emergence of two-way star Lippett and speedster Langford. Connor Cook is for sure the establish starter at quarterback, but everywhere else on the offenive side is in transition. Both guards graduated this past season, and it is yet to be seen who will fill those holes. On the side hashes, unproven wideouts Aaron Burbridge, Macgarret Kings Jr and RJ Shelton (74 rec., 931 yards, 4 TD's combined,) will have to show consistency fairly quickly in order for the passing game to be truly effective. Meanwhile on the running side of things, three different backs will be vying for playing time, including 4-star true freshman LJ Scott. Delton Williams, the rusher with the most experience, was suspended indefinitely for brandishing a gun earlier this year. For awhile, the Spartans had relied on defense to get them through games, but the offense appears to have found an identity, shown in their 11th place ranking in offensive efficiency.

The defense will get some new voices to listen to this season, with Harlon Barnett and Mike Tressel calling the shots, but the Spartans look better than ever to improve (yet again) on the defensive side of the ball. Shilique Calhoun and Freshman All-American Malik McDowell will look to cause havoc from the defensive line, while Ed Davis and rising prospect Riley Bullough will once again patrol the middle at linebacker. The interesting thing to watch for here is the corner spot. Trae Waynes is gone, as is Tony Lippett, two world-size gaps in the defense with no real ready-made replacement on the bench. One would say Demetrious Cox is the option at starting corner, but he was burned multiple times last season and lost his job to then-WR Lippett, so that isn't necessarily set in stone. Darius Hicks, who started ten games, faces a similar story. We'll have to wait and see how the corners develop before passing judgement on them.

On special teams, the Spartans were 18th in efficiency, thanks to the steadiness of Mike Sadler and Michael Geiger. However, Sadler graduates with no replacement, and Geiger had a problem converting field goals from over 39 yards, going a paltry 3-8 (although he was 11-14 from 39 and less.) Geiger will be returning, but is coming of hip surgery. Jake Hartbarger projects as a potential emergency placekicker or regular punter. Kings Jr. and RJ Shelton are on punt return and kick return duty, respectively. Both returners were pretty decent last year, with Shelton scoring a TD vs. Penn State.

MSU must absolutely win against both Central Michigan and Western Michigan in order to be taken seriously by the College Football Playoff Committee; any bad loss would certainly hurt the Spartans, making the stakes high for all schools involved. In-state match-ups are always fun and the atmosphere will surely be electric both in Kalamazoo and East Lansing. If these MAC teams have any hope of winning, they must take advantage of an inexperienced defensive secondary and pray that everything goes their way that day.

Here's the type of stuff that the Spartans watch before running on the field. It's pretty cool, to be honest.