Miami opens its season seeking redemption after a winless 2013, while Cato and Marshall look to establish dominance early in the year.

The Miami University RedHawks and Anne Hathaway have a lot more in common than you would think. No, the comparison has nothing to do with anyone on the roster being an Academy Award-winning actress, nor whether the 31-year old or a bunch of football players looks scarier with a shaved head.

Actually, the parallel is found in 2012's The Dark Knight Rises, when Hathaway's Selina Kyle is looking for the "clean slate," a device that will erase her criminal past and help her blend into the general populace. And while I seriously doubt he looks as good in tights as Hathaway, first-year head coach Chuck Martin will champion the RedHawks' search for a "clean slate" of their own as they attempt to camouflage their winless 2013 season, a year in which they were commonly viewed as the worst team in college football.

2014 might be a fresh start, but Miami is staring down a talented Marshall in Week 1. Simply put, this will be a fiendish first test for a RedHawk squad that hasn't developed a concrete identity yet. While Miami's defense kept several games competitive last season, the offense averaged just 9.8 points per game and the 'Hawks were woefully shorthanded on both sides of the ball. Second-string quarterback Austin Gearing and wide receiver Dawan Scott were Miami's leading rushers in 2013, combining for 850 yards and one touchdown on the ground. And yes, you red that correctly; a backup quarterback and a wide out were their two most effective rushers in their muddled scheme. Things weren't much better through the air, as senior Austin Boucher managed just seven touchdowns during an injury-plagued year in quick he saw a head coaching change and a pair of radically different playbooks, the former relying on a terribly ineffective triple option and the latter boasting a bare-bones short-yardage passing attack. 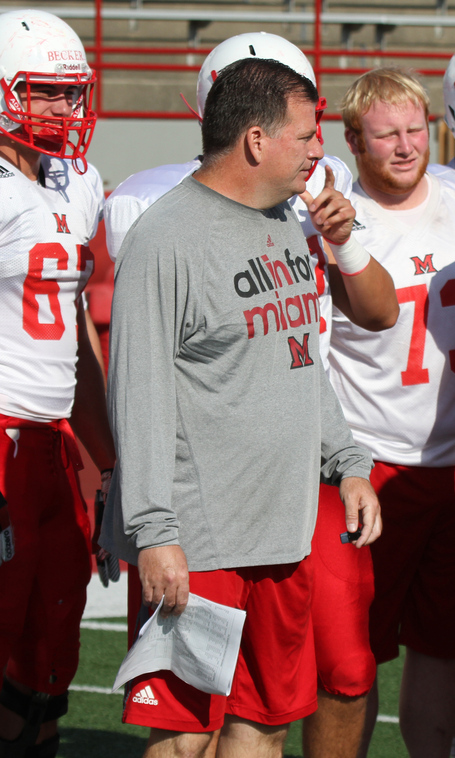 That's where Martin plans to implement the most change. The RedHawks will almost surely opt for a spread offense that complements their new quarterback, Notre Dame transfer Andrew Hendrix. A Cincinnati Archbishop Moeller graduate in 2009 and career backup for the Irish, he was one of three transfers that came over from South Bend with Martin. Most of his four years under the watchful eye of Touchdown Jesus were spent on the sideline, and Hendrix leaves Notre Dame with 360 yards and a touchdown under his belt. But what he lacks in experience, he makes up for in enthusiasm. In a press conference Monday morning, Martin said that Hendrix "can't wait to get out there on the field and have fun and compete," and added that he's thrilled for Hendrix to get a chance under center.

Seeing the senior finally get a shot is a great story, but he'll will have to snap back into starting form quickly if Miami wants to keep it competitive in the second half, the reason being the opposition's quarterback is what's known in scientific terms as an "absolute-freaking stud."

"[Rakeem Cato] makes plays every week," Martin said earlier in the week. "He's a pretty experienced, pretty smart kid ... It gets pretty scary when he gets out of the pocket and starts to ad lib. He's good when his read is there, but when you defend him well and stop his initial stuff he's even better."

Cato isn't likely on many preseason Heisman watch lists, but that's a mistake that will soon be remedied. He shredded the 'Hawks in last year's season opener for five TD's en route to a 52-14 thrashing and the Herd went on to a respectable 10-4 season that was capped off with Military Bowl victory. Cato threw for 39 touchdowns and just 9 interceptions last year and has combined for 8,117 yards in the previous two. Couple those stats with the knowledge that his top target (and childhood best friend) returns in Tommy Shuler and it could be a long afternoon for the Miami faithful.

Miami's defense, where six of the returning 12 Redhawks can be found, will have to answer the call early and often. Players like 2013 All-MAC second-team linebacker Kent Kern and sophomore Jay Mastin, who recorded 62 tackles, a forced fumble and an interception before suffering a season-ending injury in the eighth game of the year, will depended upon greatly, as will new talent the likes of Notre Dame transfer Lo Woods and Quenten Rollins, former point guard for Miami's basketball team. Game day is right around the corner and wouldn't you know it, Rollins won a spot at defensive back after a four-year hiatus from the sport. To paraphrase Martin: That's great for him, but not great for the team that a guy just walked off the basketball court and right into the lineup.

Regardless of progress made in the offseason, Week 1 will be an uphill battle for the Redhawks when they open play at 3:30 p.m. at Yager Stadium. The Thundering Herd is a brutal marker by which to gauge their progress, but Martin and Miami welcome the early challenge. A close game on Saturday is a gigantic leap out of the shadow that last year's 0-12 record cast over the program, and one step closer to that clean slate, that anonymity that comes with a record not starting with that cringe-inducing zero. And like Batman's burgling love interest, this work-in-progress of a football team just might have a few surprises up its sleeve.