NIU Huskies vs Northwestern Wildcats: A View From the Stands

The Battle for Illinois took place this last Saturday (and was won by NIU). Here's how it looked from the crowd.

Share All sharing options for: NIU Huskies vs Northwestern Wildcats: A View From the Stands

Saturday afternoon the Northern Illinois Huskies topped the Northwestern Wildcats 23-15, and I was one of the lucky 41,000 that witnessed it live. I was surprised however at how many Huskie fans traveled up for the game. Yes, NIU fans normally travel well, but this was crazy. 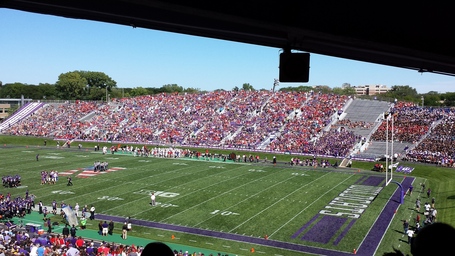 Here's a shot of our half of the stadium. Once again, red is the prevailing color. 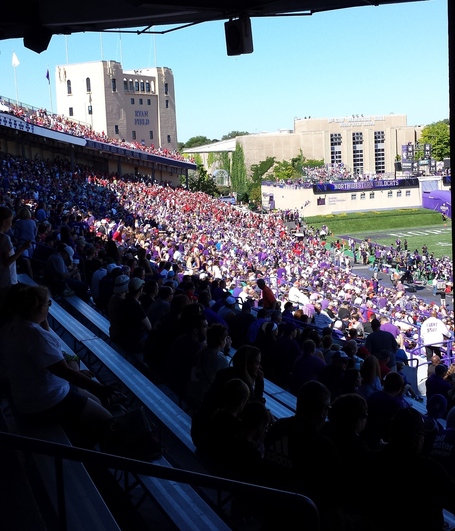 Easily more than 50 percent of the people were in red and black, including my group of four. For the Huskies, it almost had the feel of a home game - something I'm sure the Northwestern fans did not like too much.

The first half was relatively quiet as neither team had much momentum. From what I witnessed, the Wildcat faithful don't chant, or make noise, or even stand during most of the game. The Wildcat fans (granted I was on the other side of the stadium from NU's student section) just watched, only cheering for big plays. In our pocket of the crowd (which was mostly current NIU students) everyone was standing, cheering, and chanting. From simple cheers of "N-I-U" to "You can't do that!" when NU  got called for a penalty, the NIU fans seemed to get much more involved.

The best chant for me, had to be when Drew Hare ran in what would be the winning touchdown late in the fourth quarter. After taking a 23-7 lead, the Huskie students began to chat "This is OUR house" as a sea of purple flooded from the stadium in defeat.

After the victory, the whole Huskie team ran to the NIU section and began to sing the fight song and thank them for their support - something they have done before (at Purdue last season and I believe at Iowa as well, although I can't confirm that one).

We were standing by the tunnel the team had to run up to get to the locker room. With us were about 100 other people waiting for the team. As they made their way towards us, a massive "N-I-U" chant broke out. The players then began to high five, wave, and interact with us as they exited the field - all of them wearing huge smiles.

Once out of the stadium, for well over an hour after the game, NIU fans swarmed the Huskie players, congratulating them, talking to them, and taking pictures with them. It was there I got to meet and speak with Tommylee Lewis, Boomer Mays, and Cameron Stingily.

Stingily told me that the doctors originally projected he'd be out for 6-8 weeks but, somehow, he recovered much quicker than expected and felt completely healthy. That's great news for any Huskie fan.

Saturday was a long day. But it was worth every moment. From the train ride at 10 a.m. to Chicago until the one that brought me home at 9:45 p.m., there is no better way to spend a Saturday than watching Huskie football. Especially when they win.