NIU unveiled the new uniforms that the Huskies will wear for their game against the Cardinals, and hopefully a new set of digs for the season finale against the Broncos too.

There have been a few rumors spreading about new looks for the NIU Huskies, one of which has been confirmed and one we're still hoping is true. If all goes right, the Huskies will be wearing a pair of new uniforms in their final two home games of the season - both of which will be on ESPN2.

Wednesday, November 13th NIU will forgo its traditional uniforms and sport a more patriotic look, for a Military Appreciation Game, when the Huskies take on the Ball State Cardinals. Here's a few pics showing off the new look:

We will have a bit different look for our Military Appreciation Game vs Ball State November 13th! More info to come.. pic.twitter.com/fIqauKlTu7

NIU has added the American flag to the shoulders and inside the lettering of NIU on the helmet, both of which are nice touches. The back of every jersey will read "Active Heroes" instead of the players' name, in honor of all those serving our country here and abroad. Most of this uniform is pretty nice, however, the red pants from the Orange Bowl are back! Why? While the Huskies wont look like candy canes, like they did last time they wore them, the traditional black pants or even camo pants would be nicer.

Grade: B+ (can't get passed the red pants)

The Ball State game isn't the only contest where NIU might have some fresh threads though. Paul Lukas of UniWatch has posted that we might see a charcoal uniform during the WMU game. Nothing has been confirmed by the school yet, but here's a look at the picture UniWatch posted.

Northern Illinois also has a new blackout uni, for the final game of the season: pic.twitter.com/p7GhpFx70V 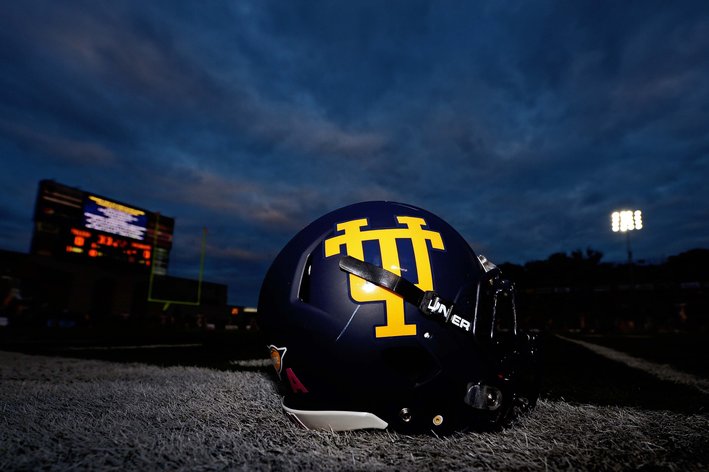 In August we took a look at the uniforms for all the MAC Football teams and ranked them. See where the Huskies came in before they added these new uniforms

Now these are sweet! The Huskies should wear these. Oh and hey, how about those camo pants!? Perhaps the Huskies can wear those for the Military Appreciation Game instead (just a thought). As cool as the charcoal jersey is, the helmet takes the cake. It seems like every team now has a matte helmet that they wear but most aren't as cool as that Huskie there. NIU should invest in making this helmet a reality. Unfortunately, as stated earlier, NIU has so far hasn't confirmed that these are a reality.

The Huskies aren't like Oregon, uniform changes happen rarely in DeKalb. Since 2001, when they adopted the new logo, there have been very few manipulations to their uniforms. It has always been black pants (except for the Orange Bowl), a black helmet with the logo, a solid red home jersey with white numbers, and a white away jersey with black numbers. In 2010 they added a black trim under the arm and piping up to the collar and in 2011, against Kent State, NIU introduced the all black uniforms. Within the past 10 month however, there have been three new uniforms (2 confirmed and one that we're still hoping gets confirmed). That's a huge difference for a team that usually doesn't change its look. But change is a good thing, right? We'll just have to wait to see how they look on the field, and based on the pictures, we can't wait to see them.