The 'Cats have named a starting QB.

The Ohio Bobcats released their initial 2014 depth chart this morning as part of MAC Media Day, and we get our first answers about some key positions. The two-deep depth chart is far from final, with fall camp still to go, but right now all but one of the starting jobs is filled.

The key position battle, that of quarterback, seems to have gone to the most likely winner, redshirt junior Derrius Vick. JD Sprague, he key competition throughout spring, is penciled in as No. 2 ont he depth chart. At running back it appears the 'Cats will go with a lightning and thunder combo, with speedster Daz' Patterson penciled in at the No. 1 spot, and bruising short-yardage back Tim Edmond in the No. 2 slot. There's no surprises on the offensive line or in the wide receiver corps.

On defense, the defensive tackle 1 spot is still up for grabs, with either senior Cameron McLeod or redshirt junior Brandon Purdum getting that job. All other positions currently have a clear starter listed. The linebacker corps will be anchored by redshirt sophomores Blair Brown and Jovon Johnson and redshirt junior Ben Russell, who led Ohio in tackles in 2013. The second slot for the strong side back is still up for grabs and is currently between a pair of redshirt freshman, Quentin Poling and Travis Daugherty.

On special teams first-year JUCO  transfer Mitch Bonnstetter appears to be the new solution at punter, and all the usual suspects return elsewhere with Miles Chapman holding down long snapper duties, Josiah Yazdani firmly entrenched as the starting kicker and devin Bass entrenched at the 'Cats top return man. 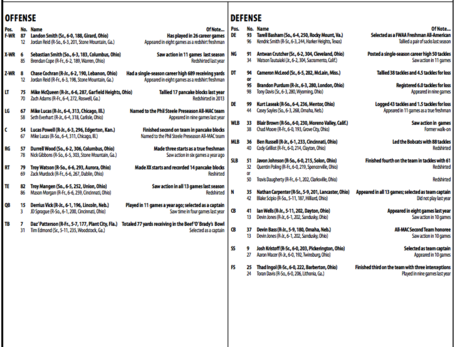