The once promising outside receiver has been sidelined since taking a shot in the season-opening game. The freshman could be in for a redshirt season if things don't turn around, according to him.

Twitter has given us unparalleled insight into what athletes and celebrities are thinking. 140 characters at a time, their innermost thoughts are put out into the open air of the internet, sometimes polluting but usually shedding light on how things are going behind the scenes.

The second of those two is what UMass Minutemen freshman receiver Shakur Nesmith did on Monday morning when he took to Twitter to bemoan the lingering shoulder injury that has kept him out of game action since the season-opening loss to Wisconsin. Here are the tweets, screenshotted for posterity. 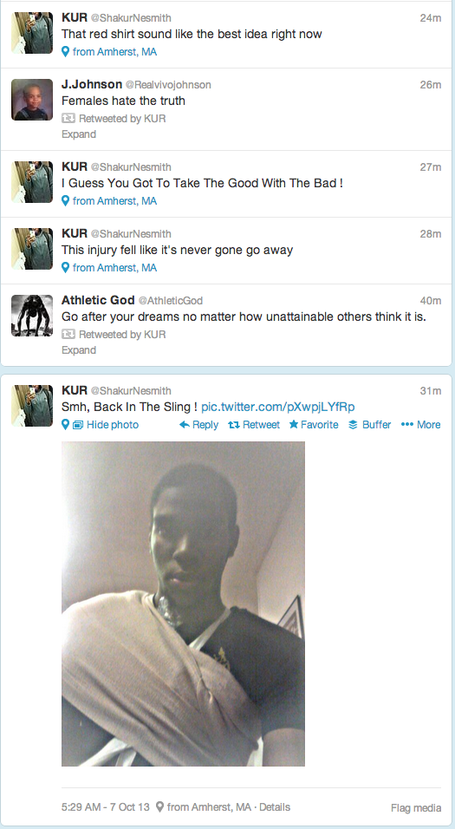 Save the one retweet about the disingenuousness of females -- remember, retweets are not endorsements, and neither are screenshots -- Nesmith was very candid about his status for the rest of the season and even suggests that a medical redshirt year is looking very appealing to the former Pennsylvania high school star. Charley Molnar and the Minutemen had high hopes for Nesmith thanks to his combination of size and talent, but the injury has kept all of us from seeing how those measurables translate onto the football field.

A former Temple commit, Nesmith showed up on campus during training camp as a former three-star prospect and immediately flew up the depth chart. He started against Wisconsin, catching two passes for 14 yards before going down with the shoulder injury.

There has been no formal announcement on Nesmith's status moving forward.