Zach Dacy is a tough little boy. When the 5-year-old leukemia patient got a chance to sack Jordan Lynch, NIU's offensive line didn't stand a chance.

Zach Dacy is an impressive little boy. At just 5 years old Zach, who turns 6 this Saturday, has spent the past two years of his life in a battle with a fierce opponent.

In May of 2011, after experiencing months of mysterious leg pain, Zach was diagnosed with leukemia. For two years now Zach has bravely been battling the deadly disease. He takes chemotherapy pills every day. Every four weeks he travels to Loyola University Medical Center for chemo treatment, and every three months he receives chemo in a port in his spine. It's a lot to handle for a little boy, but somehow Zach has managed to deal with it. Slowly but surely, Zach is beating the horrible disease. He's growing again, and his treatment is scheduled to end in August of 2014.

So when Zach got a chance to line up across from the Northern Illinois offensive line and take on one of college football's best quarterbacks, Jordan Lynch, the opposition didn't stand a chance.

Jordan Lynch: The Evolution Of a Heisman Hopeful 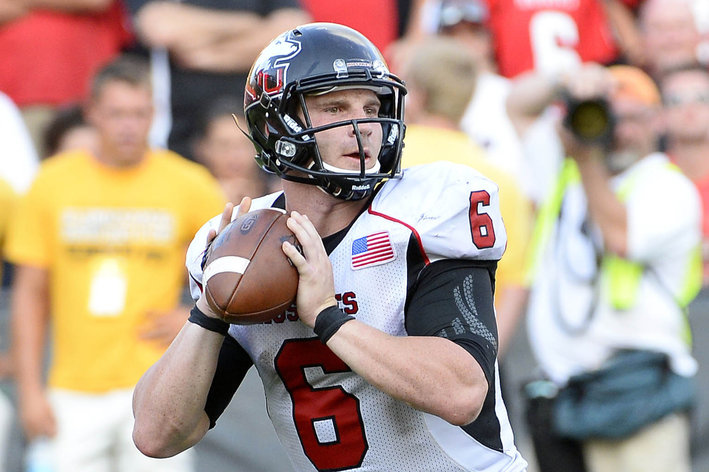 Northern Illinois' senior quarterback Jordan Lynch has gotten better with each passing week. The mid-major Heisman candidate has evolved his game and is off to a better start than in his historic 2012 season.

On Sept. 19, Zach and his family attended what appeared to be a normal Northern Illinois' practice. Zach's parents, Joe and Jen, both graduated from NIU, and over the summer reached out to the team's athletic department to see if they could bring Zach to a game in DeKalb. The school gave the Dacy's tickets to the team's home-opener against Eastern Illinois, but invited them to practice two days before the game as well.

After practice was over head coach Rod Carey surprised Zach and his parents with an opportunity for the five-year-old to sack his star quarterback. Zach lined up across from All-MAC left tackle Tyler Loos. When the ball was snapped, Zach, a big Clay Matthews fan, snuck past Loos, weaved his way around NIU running back Cameron Stingily and took the Heisman candidate to the ground, something that only three people have been able to do this year.

The players rushed Zach in celebration lifting the little boy high into the sky, congratulating him on his huge play.

"When it happened, I got so choked up," Joe, Zach's dad, said via HuskieWire.com. "You learn to appreciate some of these little moments so much more. And not that that was a little moment, but the things that people like that are willing to do are just…it was such an amazing experience."

The play took just eight seconds, but the impact it left on Zach and his family will last much longer.

"To see [the team] and how they’re interacting, I know they’re young kids. Them taking the time...they wanted to do it," Jen, Zach's mom, told HuskieWire.com. "It’s not liked they looked like, ‘Oh great. We’ve got to do this.’ They we’re excited to do it, and that meant a lot."

Carey said that seeing Zach sack his quarterback gives his team perspective. "We coach a game, we play a game...there are bigger things in life than just this game."

For Zach, there are bigger achievements left ahead in his battle with leukemia, but getting to take down a Heisman candidate sure is a good one..